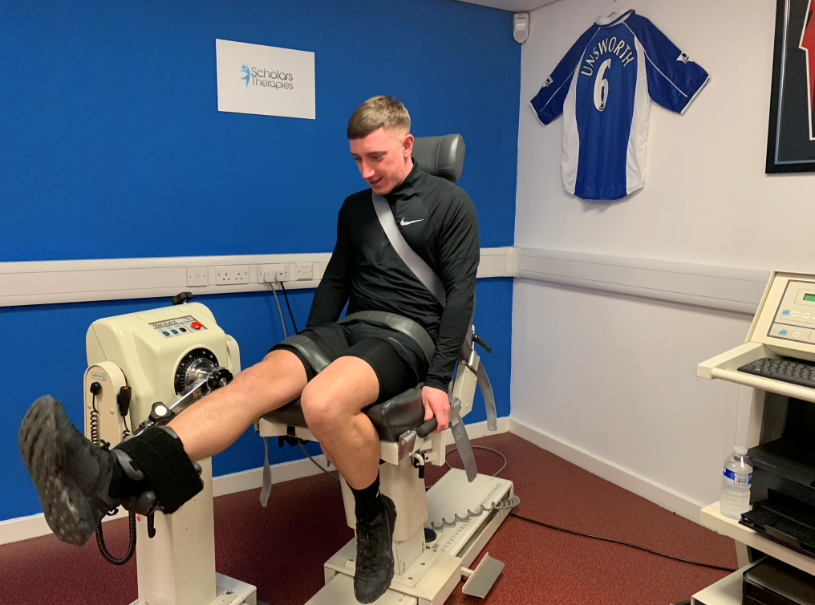 Sports Injury Fix member and Sports therapist Gareth Thomas of Scholars Therapies has been using isokinetics for over a decade in professional sport, occupational health, education and private practise. Gareth kindly gave his time to share this experience in this area and outline how he incorporates it within his clinical practise.

Let us start with the elephant in the room…  What is isokinetics?

Isokinetic exercise is defined by the JOSPT as "a fixed speed and a variable resistance that accommodates to the individual's muscular output throughout the range of motion” .

Whilst the isokinetic dynamometers look very modern, they have actually been around since the 1960’s, but became more popular in the 1980’s. 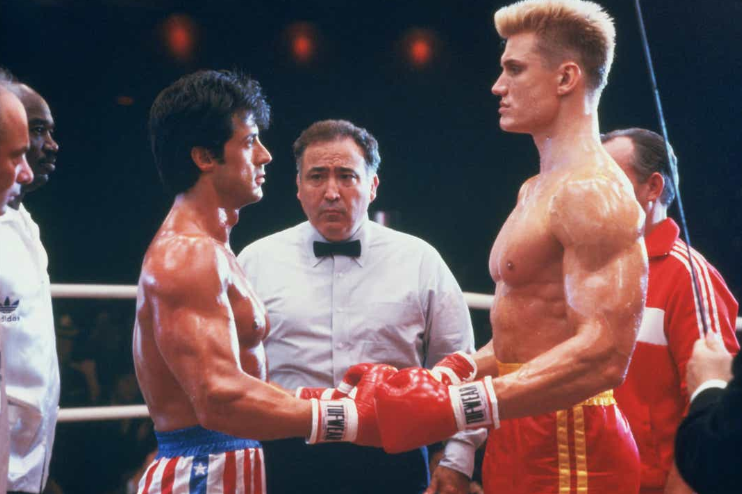 My early memories of isokinetics was watching Rocky 4 as a teenager and wondering what were those funky, clunky machines that the Russian, Ivan Drago was training on!? Safe to say the seeds where planted there.

These seeds didn’t grow until I came across isokinetics at university during my second year of my BSc (Hons) Sports Therapy Degree at Edge Hill University. I was instantly intrigued and fascinated all at once! I was fortunate to be introduced to Dr Matt Greig (now Prof Greig!) who was my dissertation supervisor and he really got me hooked on isokinetics and the abundant possibilities you could explore.

My dissertation evaluated the correlation between angle of peak torque for eccentric hamstrings across three groups of athletes; Group 1 were sprinters, group 2 games players (footballers, rugby union and rugby league players) and group 3 was a non-sports specific population. 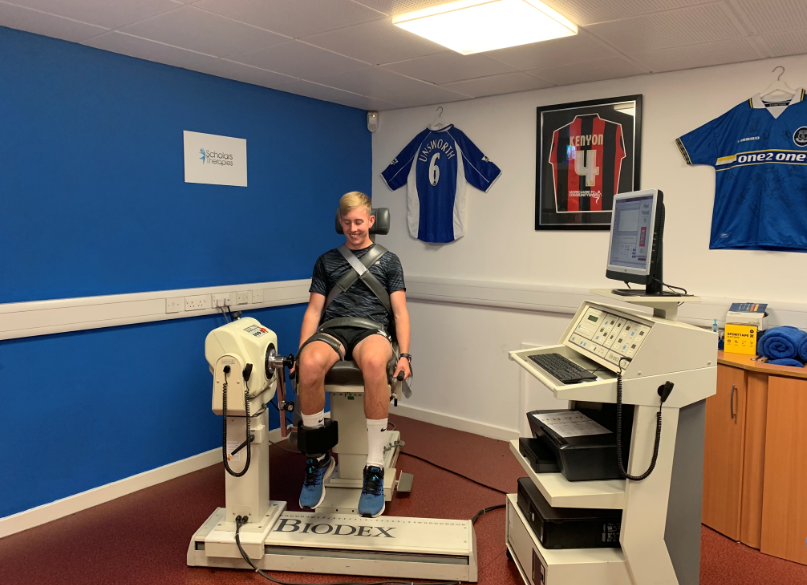 I hypothesised, that due to the difference in running gait between the sprinters and games players, (games players have more a cyclic action with more ground contact time to enable them to change direction rapidly due to the nature of the sport), would mean the sprinters would achieve their peak torque closer to full knee extension and that the games players would be closer to knee flexion and the non-sports specific group would be in the middle. Let’s just say I was over the moon when the results come in to show a hugely significant correlation and our hypothesis was proven correct on all 3 fronts.

For the past 10 years since graduating, I have used isokinetics in a variety of different settings (occupational health, professional football, clinical education and now my own private practice, although I have only ever used a Biodex isokinetic dynamometer (nothing against other brands, but now I am familiar and I like it, I wouldn’t change!).

For the past 12 months, I have had my very own Biodex System 3 (2nd hand from IPRS Mediquipe) and I think in that year I have learnt more about how to utilise the machine than in the 9 years I previously worked with someone else’s machine. I have learnt that we are primarily limited by our imagination and the manual that comes with the machine! My main reason for writing this blog is not to tell you about how great I think isokinetics is (but it is…) or to tell you it has the answers to everything (it doesn’t!) but to give you all an insight into how an isokinetic dynamometer can be utilised for so much more than ‘testing’. 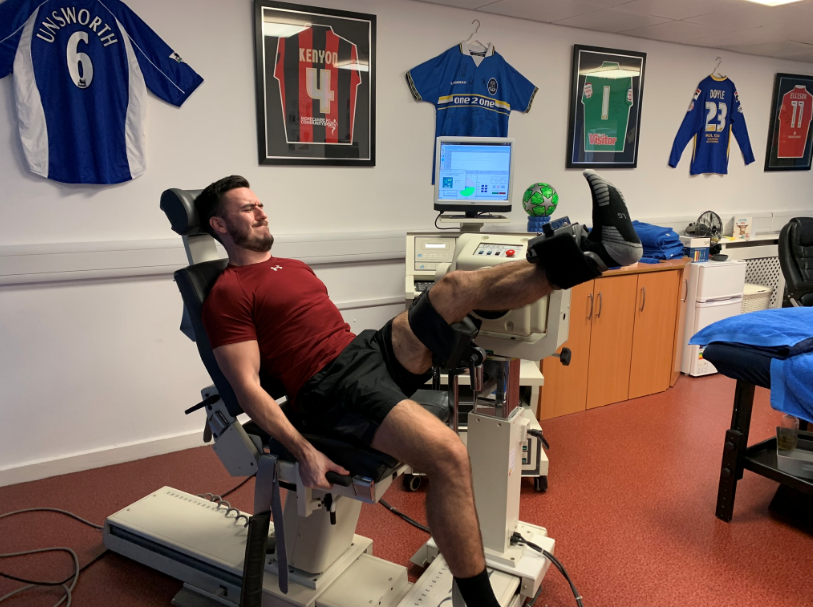 If you look at it the same as me when you invest a chunk  of change in something, you want to maximise your return and make sure you explore all its functionality and not just use it for the basics i.e. simple knee extension/flexion con/con test… The way I see it… Why have a smart phone and only use it to text or call? You can do that for a lot cheaper! The same applies for an isokinetic dynamometer. If you only use it for one function, and I know of some places that only use it for isometric testing, not even rehab, JUST TESTING!!! If that is the case, then the machines look grossly over-priced and you can get a handheld dynamometer for £200 these days that would do that (with some creativity).

I must be honest and at this point highlight two massive inspirations of mine in the world of isokinetics, the First is Bill Gallway who works for Biodex in the USA. Bill is an athletic trainer by background and now works as a senior business manager within Biodex.  The second is a Sports Physiotherapist called Dave Fevre. I have listened to both of these men talk for hours on all things isokinetics and these visionaries have given me so many ideas over the years, I feel it’s only right that they get mentioned!

So now I will outline how I utilise the isokinetic machine we have at our Chorley Scholars Therapy Clinic. This is only a guide and based upon my own experience and implementation of the available evidence.

The clue is in the title I suppose. Isokinetic dynamometers are without doubt a great way of testing and measuring isolated muscle strength, power and endurance and is widely seen as ‘The Gold Standard’ for muscle testing.

Isokinetic testing helps ensure we have objective data to help inform our collective decision of when a patient can perform certain activities such as return to run and return to training.  There is a particular ‘myth’ in ACL rehabilitation that the patient can start running at 12 weeks post-surgery. I just don’t understand this way of thinking.

At this 12-week post-surgery many patients’ objectives should still be the restoration of maximal strength. At 12-weeks I conduct a test on the isokinetic dynamometer, if the patient passes the criteria, they can start the return to run programme.

However, I still stress that the primary emphasis of rehabilitation at this stage is still developing maximal strength and rate of force development. If the patient does not meet the criteria, they continue with their gym-based rehabilitation until they pass.

To clarify, isokinetic testing is not the only criteria for return to run but in my opinion this and the single leg press 1RM estimate (1.5x BW) that Mick Hughes and Randall Cooper mention in their  Melbourne ACL Programme are the ones most patients fail, and therefore highlights they don’t have sufficient capacity to return to run yet. 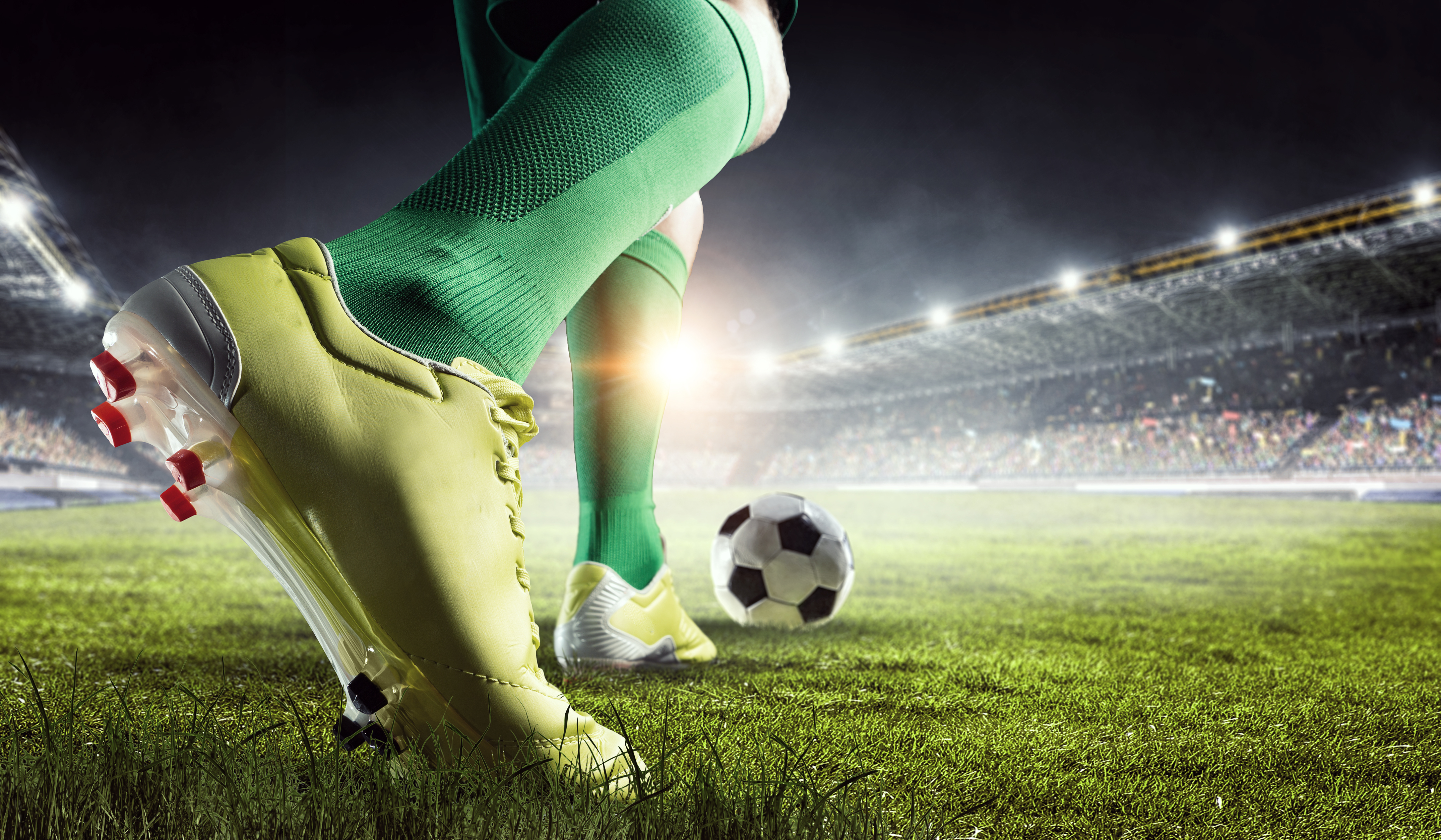 But that doesn’t mean you have to be limited to performing standard tests. A recent example is a professional footballer who felt he had no option but to retire following multiple hamstring injuries. Traditional strength testing elicited no deficits in hamstring strength (other sources of his hamstring injuries had been investigated and cleared).

However, I tested him in the standard seating position, prone and also in a ‘lengthened state’ as pictured. In this lengthened state he had a significant weakness, more than 20% on the affected side for both isometric and eccentric tests. This give us hope of something new to work on that he hadn’t previously done during his rehabilitation. So, we focused on this setup for his rehabilitation.

The really interesting thing was the player reported that he had never felt the injured aspect of the hamstring working like he felt it during the lengthened state rehabilitation.

I would argue that because isokinetics exercise has a constant speed and variable resistance, it makes it a lot safer to load patients that conventional exercise methods.

This same principle also ensures maximal contraction can be achieved, resulting in significant improvement in hypertrophy and strength when programmed correctly. 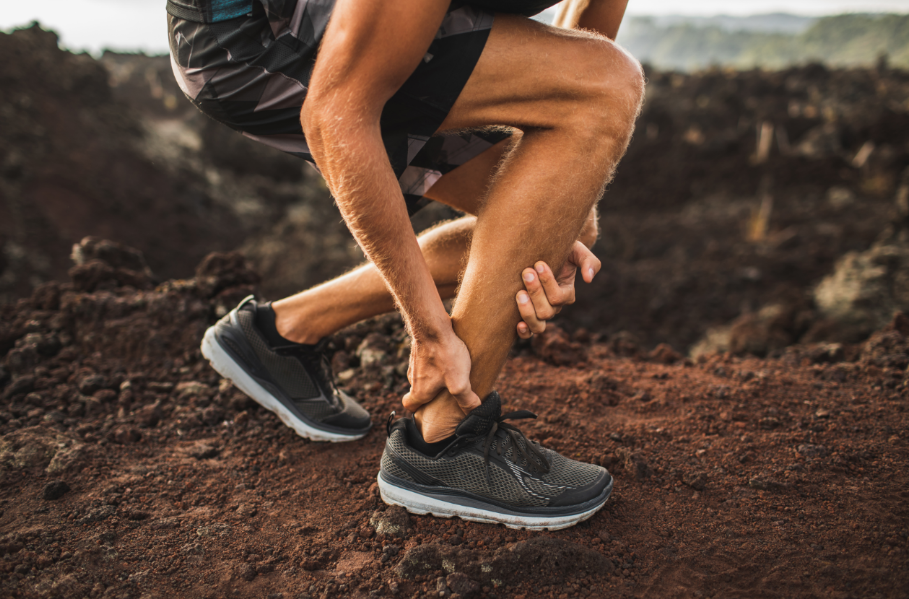 I mentioned isometric testing above, that’s not to say that I don’t use these tests. They can be extremely useful throughout the rehabilitation period, especially when managing tendinopathies.

My preferred method is to use isometrics in a practical way by taking note of the force produced during rehabilitation sessions. I find isometrics a great way of helping patients build confidence in producing force, and they have immediate biofeedback to consolidate this confidence.

I have also found the isometrics mode a nice way to help activate muscles post-surgery/acute injury in conjunction with an electro stim device such as a Compex.  I find this helps reduce atrophy and is a great way of building confidence in producing force through the affected area. Again, I must emphasise this is one aspect of someone’s treatment and not the answer for everything! 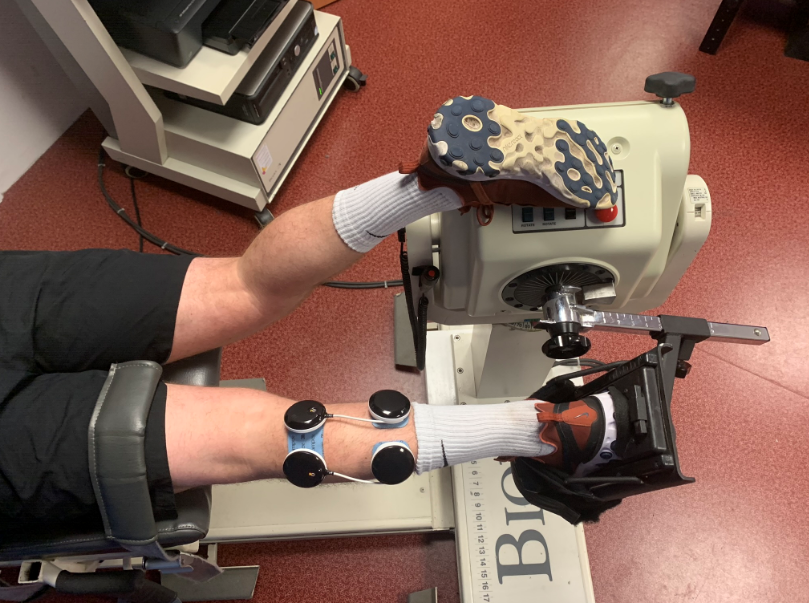 The passive mode is another mode that opens so many doors for us as therapists. In passive mode, it can be used to accurately assess the range of movement to the degree, then re-assess following the passive protocol.

During this protocol, it is a great opportunity to perform some specific soft tissue mobilisation, mobilisation with movement or active assisted work rehabilitation. I find this especially useful in the early stages of rehabilitation. Passive Mode can also be a great learning tool for eccentric muscle contractions.

The eccentric setting on the device can be a bit awkward and complex for patients to understand what is needed. I have found the passive mode provides a smoother alternative. Again, the patient can receive instant feedback during the test/exercise.

Please feel free to reach out if you have any questions, I certainly don’t have all the answers, but I am happy to help where I can!

Read more of our blogs at Sports Injury Fix here.